We recently learnt that the Marine Conservation Society (MCS) have taken the decision to place creel-caught crabs and lobster from the west coast of Scotland on the ‘fish to avoid’ (red) list, in part due to concern over marine animal entanglement risk.

Entanglement is a global problem in many fisheries, is not limited to crab and lobster creeling, and Scottish creel fishermen have been leading the way into research for mitigations for this issue. This has included expressing support for pot limitation pilots and highlighting the need for better management of the sector.  The Scottish Entanglement Alliance (SEA) was not contacted by MCS for input and we feel there may have been a misinterpretation of recommendations made in our recent report which could be damaging to the future work of this consortium.

The entanglement of large marine animals (such as whales, basking sharks, turtles) in fishing gear is a worldwide issue, and the Scottish fishing community have been proactive in seeking solutions to this problem. With the assistance of funding from the European Maritime and Fisheries Fund (EMFF), SEA was established in 2018 with the aim to better understand the extent and magnitude of entanglements. The focus of the SEA project has been to positively engage fishermen in this research towards developing workable mitigation strategies. The initial project ran for two years and our report was clear this was an initial study and identified a pressing need for further work to better understand, and hence mitigate the problem of marine entanglements. It made the point that given this is a data deficient area, with likely significant under-reporting of cases, the true extent of the problem could not yet be reliably estimated. We were clear there was insufficient evidence to make valid risk assessments at this stage.

Creel fishing, properly managed, is a selective and environmentally sustainable form of fishing which offers a higher level of employment and lower environmental footprint than many other fishing sectors. The move to place some regions on the red list; the same category as dredge caught scallops, is unjustified and counter-productive. The SEA consortium aimed to create a model whereby fishers, conservationists and fisheries managers could work together in a constructive manner to introduce entanglement mitigations, which, if successful, could be a model for other fisheries. This recent decision risks disincentivising engagement from the very people who up to now had been pioneers in work to identify and develop proportionate and effective solutions to a global problem. 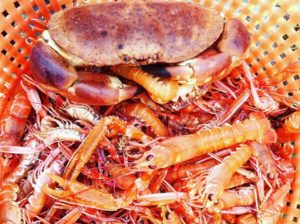